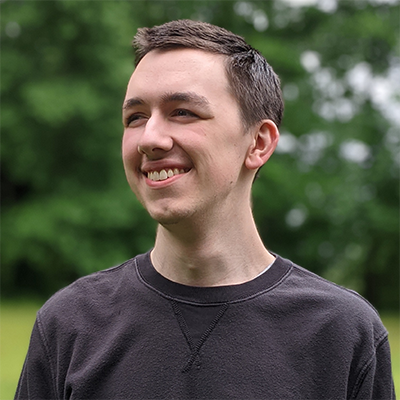 Ellis completed an internship with the Cooper Center Media Team through UVA's Internship Placement Program. As part of his internship, he helped to create video trailers and an infographic for the Center's podcast series.

“I really enjoyed the amount of creative freedom that I had during my internship. For example, I was able to experiment with a lot of different art styles for the audiograms I created, and in doing so I learned more techniques in some of the computer programs I was using."

Ellis was a rising third-year student studying Music and Computer Science when he completed his internship.

Why did you choose to intern with the Cooper Center, Sorensen Institute?

I was very excited at the prospect of doing media production for something outside of my own projects, and I was also excited to be working for an organization focused on public service, which is something that is very important to me.

What were some of the projects you worked on as part of your internship?

The majority of my work at the Cooper Center was creating short video trailers (audiograms) for the Cooper Center’s podcast episodes, which would be posted on social media. I also created an infographic and a script/editing template for a trailer for Season 1 of the podcast.

What did you learn as a result of this internship?

Has your experience helped you in your academic studies, given you skills you can use in a future career or helped you to think differently about your academic and/or career path? If so, how?

Yes, definitely. For a long time I wasn’t sure if I wanted to make media production part of my career, as it’s pretty much always been something I’ve done just for fun. However, the feedback I would get from my work at the Cooper Center was very validating for me in terms of my skills in media production, and now doing that as at least part of my career feels like more of a possibility.

What was your favorite part of the internship?

I really enjoyed the amount of creative freedom that I had during my internship. For example, I was able to experiment with a lot of different art styles for the audiograms I created, and in doing so I learned more techniques in some of the computer programs I was using. I think that open-ended-ness is something I will look for in future jobs.

Would you recommend working at the Cooper Center to future students?

Yes, I would! I think whether they would be doing the same type of work that I did or something different, I think the Cooper Center is just a great place to work. As I mentioned above, everyone I met there clearly cared deeply about the work they were doing and the people they were working with. My supervisor was great at communicating with us interns, I never felt swamped by work or that the assignments I was getting were too easy, and overall I really enjoyed the work I was doing and felt good about the organization I was doing it for.